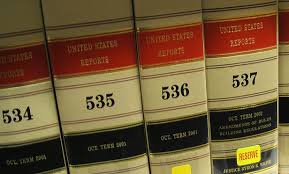 The title Federal Cases (KF 101 .A3L2) is a reporter published by the predecessor to West Group. This set compiles federal opinions that were issued by the federal courts prior to the creation of the Federal Reporter and the Federal Supplement. These cases are assigned unique numbers and are cited by these numbers according to convention. Note the rule in the Blue Book describing the citation format (p. 217 in the 19th Edition).

The U.S. Supreme Court reports its opinions in United States Reports (KF 101 .A2 - 5th Floor Law Library) which is the official publication of the Court.

West (a subsidiary of Thomson Reuters) publishes the Supreme Court Reporter (KF 101 .A3W4- 5th Floor Law Library). As mentioned here, these are unofficial. Many people rely on the latter two for citations as they will appear in print long before the Court’s official publication, which can lag from one to two years from the release of an opinion.

Other than the COA for the Federal Circuit, the federal appellate court system is organized geographically. Illinois is in the 7th Circuit, which comprises the states of Wisconsin, Illinois, and Indiana . Most federal appellate opinions are reported in the Federal Reporter, (now in its third series - KF 110 .F44 - 5th Floor Law Library). The exception to this statement is described in the section on unpublished opinions.

U.S. Federal District Courts (Chicago is in the Northern District of Illinois)

Each state may have one or more Federal District Courts, depending on how congress has organized the federal courts of an individual state.

Illinois has three districts – the Northern, Middle, and Southern Districts. Kansas, for example, has only one district.

Trial judges in the Federal District Courts do issue opinions, and many (but not all) are collected in the Federal Supplement, (now in its third series - KF 120 .F43 - 5th Floor Law Library).