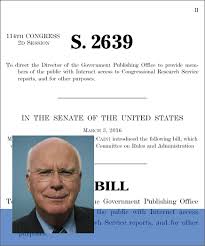 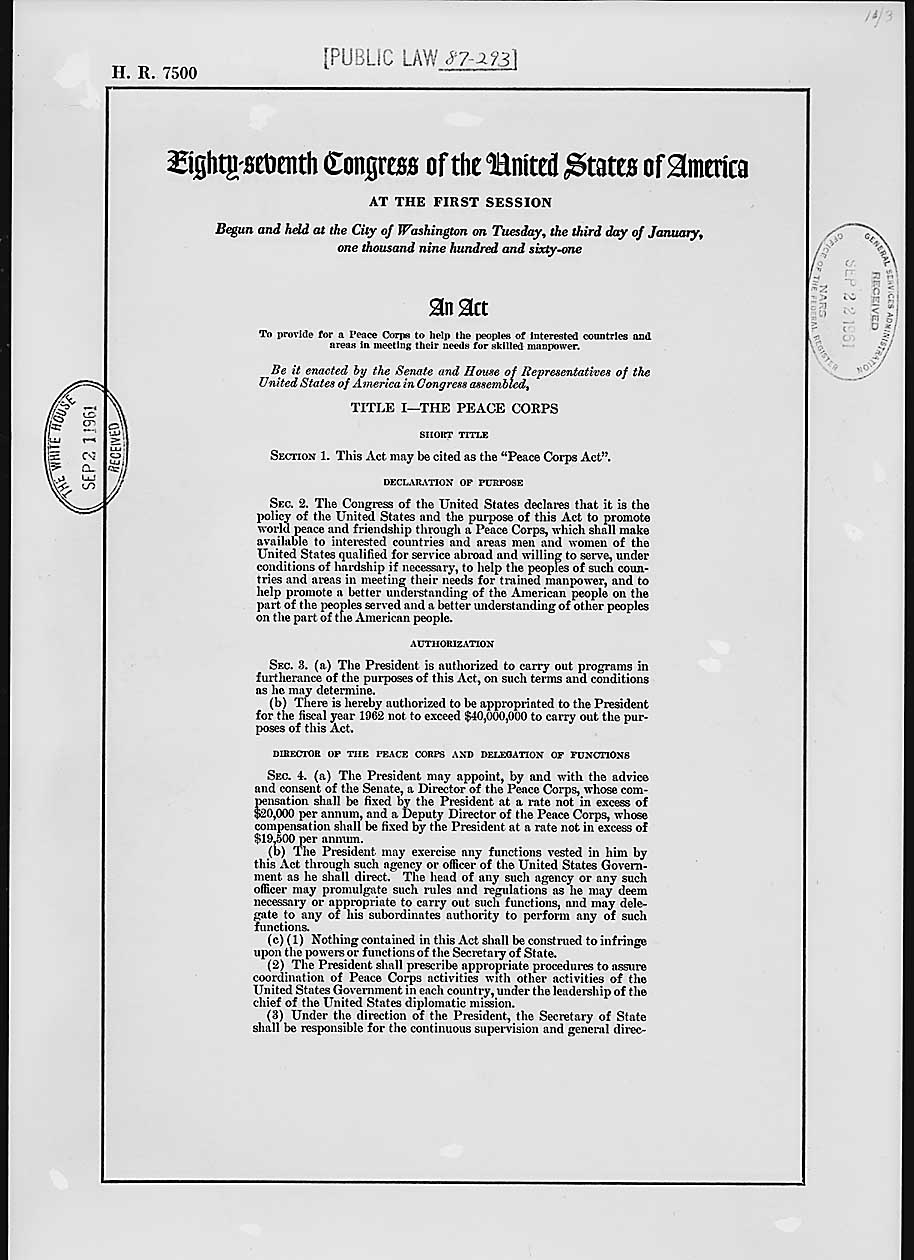 Congressional Bills are introduced in either house of congress.  Tax bills, however, can only originate in the House of Representatives.  They are designated by an alphanumerical citation that indicates the house of origin and the type of proposed legislation.  For example S 1347 is the 1347th bill introduced in the Senate for a congress; HR 4637 is a house bill; SJR 12 is a senate joint resolution.  Bills follow the legislative process until they pass or die.  If a bill does not pass during the session of congress in which it was introduced, it dies, and must be reintroduced in the next congress for continued consideration.

Bills are not published in comprehensive paper publications because the volume is too large to be commercially viable.  United States depository libraries usually have archives of bills in microform format, and CIS publishes a commercial set of microforms. Bill text and tracking are available through Lexis Advance and Westlaw Edge.  The government provides comprehensive bill and legislative tracking since the 104th congress (approximately 1995) on http://www.congress.gov.  Some Bills on Congress.gov go back as far as the 92nd congress (approximately 1972).  Bills are searchable and downloadable in PDF format, including versions from different stages in the process.

Terms you may encounter to describe various versions of the bills include “introduced,” “engrossed,” and “enrolled” . Once a bill is introduced, it may be amended on the floor of the chamber of introduction or in committee.  In any event, the amendment alters the language of the bill.  Once a bill passes the first chamber, with or without amendments, the text is considered “engrossed” and sent to the second chamber for consideration.  The final version of the bill that passes both houses of the legislature is termed “enrolled” and sent to the executive for signature.

Public Laws (link to both U.S. Public and Private Laws)

When Congress passes an act and the president signs it, the act is given a public law number.  The current version of a public law citation is designated by the number of the congress which passed the act, and the numerical designator of the order in which the act was signed.  For example, P.L. 106-347 is the 347th law enacted by the 106th congress.  Earlier congresses used years and chapters as a designator.  However, most modern legislation uses the P.L. format.

The law is printed as a slip law, which contains, in pamphlet form, the text of the law as passed.  Various sections of a public law may be codified in many different parts of the U.S. Code, as there is no restriction on congress not to combine unrelated material in a single bill that is voted on and passed as a whole.  The slip law will usually note in the margins where particular section of the Public Act will appear or affect in the U.S. Code.  Sometimes a section of a Public Law will amend an existing section of the code by ordering existing text stricken out and new text added in its place.  Sometimes these amending sections will revise the numbering of existing sections and add new material where old sections existed.  The historical notes in the various compilations of the Code help a researcher keep track of the affect of an amendment to a section.  The current slip laws published by the United States government contain page numbers that correspond to the pages in Statutes At Large.  In essence, slip laws are advance sheets to Statutes At Large. 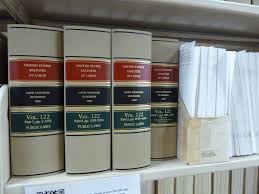 Statutes At Large is the bound compilation of session laws of the United States.  Session laws are easily what their name implies, printed versions of laws as passed by a specific legislative body in the order in which they are passed.  Statutes At Large contains tables which cross-reference sections of a law to their codified counterparts.  The volumes also contain the text of resolutions and other material voted on by congress.  They contained the text of all treaties ratified by the Senate until approximately 1952 when these materials were published instead in a (then) new set of books called United States Treaties.

Laws usually have popular names and short titles.  These are usually a lot simpler and clearer than the technical names of some acts, which can be very long and cumbersome.  A short title is usually designated by one of the first sections of a Public Law which will state the short title designated by the passing legislative body.  A researcher can locate citations to popular names and short titles in the tables that appear in one of the last volumes of each U.S. Code compilation.  Shepards also publishes a volume called Acts and Cases by Popular Name that provides the same utility (popular name searching is possible on Westlaw Edge & Lexis Advance as well) .

West publishes a set of books that tracks congressional and executive activity.  The United States Code, Congressional and Administrative News (USCCAN) reprints Statutes At Large (including page numbers), and adds edited legislative history and other related analytical material.  This set has been published since 1942 and is available back to that date on Westlaw Edge.

The best index to congressional activity, including public laws is CIS, which stands for Congressional Information Service.  The paper volumes are detailed and in-depth references to all congressional activity, with access points by numbers, dates, and subject.  The books are cross-referenced to fiche that have the full text of the indexed document.  More information on CIS and its online counterpart, Proquest Congressional, will appear in the discussion of legislative history (a Federal Legislative History Libguide (including some State Legislative History information) is a forthcoming Libguide which will be added later this Spring 2020.).

Statutes At Large and Public Law databases are available on both Westlaw Edge and Lexis Advance.  The U.S. Code, Congressional and Administrative News is on Westlaw Edge.  Proquest Congressional is available via our Law Library's Database List and includes an area of services from Lexis that are usually purchased separately from the Lexis Advance online service.

The Official and Unofficial Codes of the United States

The Code is organized into 50 titles, which are broken into chapters, and then sections.  Citation to the code refers to title and section, such as 42 USC §1983 (2000).  Chapters are not part of the citation format.  Each title generally covers a single subject.  However, the code has grown so broad that material related to a particular subject may be found in other titles.  For example, the civil rights laws of the United States are generally in Title 42.  However, criminal penalties for some civil rights violations are in Title 18, which covers crimes and criminal procedure.

The official code will provide the text of the statute current to the date noted on the title page of the printed copy, its source, and its revision history.  The editors provide notes, short explanatory or cross-referencing material, about a section or chapter when appropriate.

West publishes this version of the code.  The organization of the USCA uses the same numbering system as the USC.  West publishes the code in approximately 200 plus bound volumes.  These are updated by annual pocket parts, and assorted pamphlets published throughout the year.  In addition to the material in the USC, West adds notes of decisions, which are annotations of cases that has interpreted or invoked the particular federal statute.  Annotation sets are indexed by a numerical/subject outline appearing just before the start of the set.  West also adds references to topics and key numbers for their digests that are relevant to the statute.  The rest of the text includes historical notes of revision, selected law review citations, and cross references to treatises and other analytical material published by West.  There are table volumes that provide cross-references between code sections and Statute At Large citations, and between earlier versions of the code that appeared before the current compilation (1927).  A popular name table for laws appears in the last index volume.

This is the version of the code that is on Westlaw Edge.  All of the full text is searchable, including all of the editorial and extra analytical material that West provides in the printed edition.  The search results will indicate the date or Public Law through which the text is current, thus indicating whether or not further updating is necessary.

Several different legal presses have published the United States Code Service.  The Lawyer’s Cooperative Publishing Company (LCP) originally published the code.  Thompson Publishing purchased LCP and West among others, forcing Thompson to sell the USCS as part of antitrust compliance with the Justice department.  Lexis purchased the publishing rights as they had always had arrangements with LCP to use this edition of the code as their online federal code database on Lexis Plus.

The USCS shares a lot of publishing characteristics with the USCA.  It is organized with the same numbering system as the USC.  There are annotations, historical material, tables, cross-references to Lexis online material and other analytical material in the Lexis publishing world in addition to the same material in the USC.  Annual pocket parts and other pamphlets update the volumes.  The statutory source text comes from Statutes At Large, which is different from the technical corrections (i.e., spelling errors, etc.) that West editors introduce in their version of the code.

Which version to use?