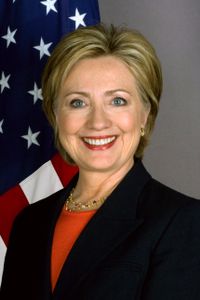 Hillary Clinton ran for president in 2016, championing her belief that Americans are stronger together. In July 2016, she became the first woman to earn a major party’s nomination for president, and went on to earn 66 million votes.

Hillary Rodham Clinton has served as secretary of state, senator from New York, first lady of the United States, first lady of Arkansas, a practicing lawyer and law professor, activist, and volunteer—but the first thing her friends and family will tell you is that she’s never forgotten where she came from or who she’s been fighting for.

Hillary grew up in a middle-class home in Park Ridge, a suburb of Chicago. Her dad, Hugh, was a World War II Navy veteran and a small-business owner who designed, printed, and sold drapes.

Hillary Diane Rodham Clinton (b. October 26, 1947, in Chicago, Illinois) served as the Secretary of State of the United States of America from 2009-2013. She is also a former Democratic member of the U.S. Senate from the state of New York. Clinton served in the Senate from 2001-2009. She was the first former first lady to serve in the U.S. Senate and in a president's cabinet.[1]

Clinton ran for president of the United States in 2016, receiving the Democratic nomination at the 2016 Democratic National Convention on July 26, 2016. She was defeated by Donald Trump in the general election on November 8, 2016.[2]

Clinton is the wife of former President Bill Clinton and served as the first lady during President Clinton's two terms. She also ran in the Democratic presidential primary in 2008 against Barack Obama