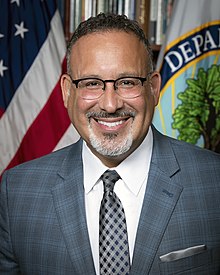 Dr. Miguel Angel Cardona is the current United States Secretary of Education. Cardona was born on July 11, 1975, in Meriden, Connecticut, to Puerto Rican parents. Cardona grew up speaking Spanish as his first language and struggled to learn English when starting kindergarten. He was raised in a housing project in Meriden and graduated from the H.C. Wilcox Technical High School, where he was a part of the automotive studies program. Cardona earned a Bachelor of Science degree in education from Central Connecticut State University in 1997. He obtained a Master of Science in bilingual and bicultural education at University of Connecticut (UConn) in 2001. In 2004, he completed a professional sixth year certification at UConn where he earned a Doctor of Education in 2011. Cardona's dissertation entitled, Sharpening the Focus of Political Will to Address Achievement Disparities, studied the gaps between English-language learners and their classmates.